The article 54 of the Spanish Constitution created the Defensor del Pueblo in Spain, through the adoption of the Organic Law 3/1981 of 6 April 1981 for the creation of a High Commission Parliament designated to defend human rights.
. 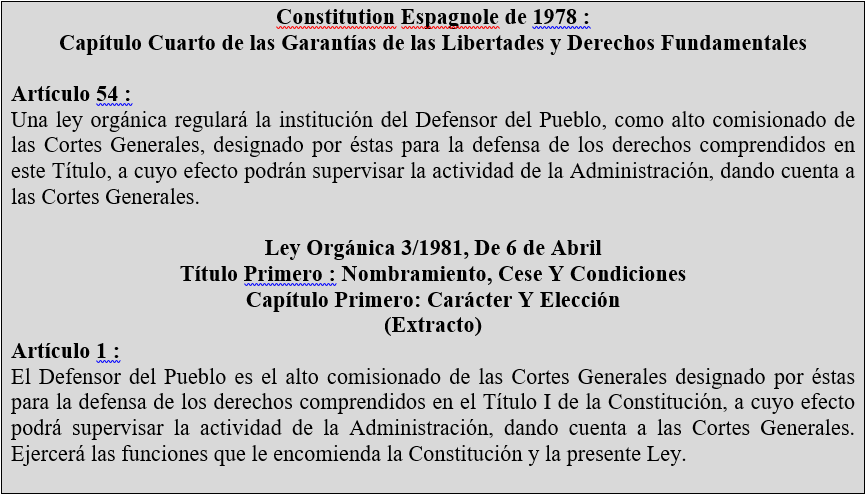 .
The Defensor del Pueblo is elected for a period of 5 years by a majority of three fifths in the House of Representatives and the Senate. It is an independent institution, which does not receive instructions from any authority and exercises its functions independently while enjoying inviolability and immunity during his term.

From July 22nd, the acting Ombudsman is Mr. Francisco Fernández Marugán who will be in charge until a new one is appointed by the members of Parliament.
The Spanish Ombudsman is assisted by a First Deputy competent for the economy, finance, housing, immigration, equal treatment and environmental planning and a second Deputy, responsible for security issues, justice, employment, education, culture, civil servents health and social policy. They are appointed with the consent of Parliament, and form the General Secretariat of the Council of Coordination and Home Affairs whose functions are defined in Article 18 of the Rules of Organization and Operation.
The ethics in security is the second deputy competence. The department in charge of ethics in security is the department of Security and Justice.
The department has an area manager advisor and 7 technical advisers among which only two work with issues related to ethics in security.
.
Organisational Chart:
https://www.defensordelpueblo.es/en/who-we-are/structure/ (English)
https://www.defensordelpueblo.es/transparencia/informacion-institucional-y-organizativa/estructura/organigrama/ (Spanish)

The Department of Security and Justice, depending on the Second Deputy Ombudsman, is in charge of the investigation of complaints about the actions of the Security and Police Forces, the Judiciary, the situation of prisoners, public safety issues, the treatment of victims of crime and road safety.
.
It receives requests for actions of police forces and other security agencies in the administration of justice, the situation of prisoners, public safety issues, and pays particular attention to victims of crime and safety road.
The office can take the initiative on cases that have been brought to its attention regardless of the means when the cases constitute a violation of fundamental rights and freedoms.